"The reason why geologists are privileged, among scientists, to slip into such naivety has to do with their training as creators of stories based on rather slim evidence (a fact remarked on by Mark Twain). For example, we can look at some piece of rock in Kansas or northern Germany, and tell a wonderful story about enormous glaciers carrying that rock over hundreds of miles, thousands of years ago. My point is that those who reconstruct geological history are engaged in a type of myth making, an activity carrying the risk of being assigned to the lunatic fringe by the less adventurous, and yet an activity that is potential fruitful."

BERGER (2007): On the discovery of the ice age: science and myth. From Piccardi & Masse: Myth and Geology. Geological Society, London, Special Publications, 273: 271-278
A team of geophysicists at the University of Texas travelled to Tonga last November in search of rumoured reports of large out-of-place erratic boulders located along the western flank of Tongatapu. During their expedition, the researchers found a 3 km chain of massive coral boulders that had been deposit 100-400 m inland. The analysis suggests these boulders may represent the largest known tsunami deposits on Earth. Radiometric dating and structural/sedimentary interpretation indicates these boulders may have been emplaced recently (Holocene).

The boulders lacks a pronounced soil or vegetation cover, letting conclud that they are relatively "young".

A boulder thrown on land by the catastrophic tsunami as consequence of the eruption of the volcano on Krakatoa in 1883.

In some areas of Europe or North America, you can find also strange boulders, with diameters ranging from meters, weighing probably 100 of tons, lying on flat terrain, with no apparent source wall where the possibly felled off. They often even don’t resemble the same geology of the surrounding landscape and the underlying underground, for example you can find large boulders of carbonates on a crystalline basement.

Local legends often attributed the position end existence of this stones to the work of the devil. To get a human soul he had to build a wall or a building in just one night, but when he realized that he couldn’t finish the work, he just let fall the stone that he was carrying from the mountains down to the plain – and so you can find it lying there until today.

Other legends tell us, that they where playthings of giants, a notion that is reflected in common language to the present day, in southern Sweden the "giant" erratic rocks are “things thrown by giants”.
And finally a legend from Tongatapu tells us, that the god Maui throws the rocks from the sea on the land, trying to kill a giant, men-eating chicken.

But the so called erratic boulders remained for much longer time then the local legends where told one of the most puzzling mysteries for geoscientists. In the 18 and 19th century one of the discussed scientific explanations was, that the observed boulders where deposited by a large flood or Tsunami (by some attributed directly to the biblical flood story).

The first descriptions of erratic boulders are attributed on some authors of the early 18th century, like Karl Nicolaus Lange (historian, living from 1670 to 1741) in the year 1708, or 1715 by Lars Roberg (doctor in medicine from Upsala, living from 1664 to 1742).
Berner Gottlob Sigmund Gruner realized in 1774 that the source region of the boulders (denominated “Geißberger”) found on the plain forelands of the Alps, were in fact the mountains of the Alps. He also had studied intensively the glaciers in the Swiss mountains.
But the most convincing hypothesis for the time on the genesis of the boulders was presented by the swiss naturalist Horace Benedict de Saussure (1740-1799). He had climbed mountains around Geneva since 1758, and after 1760 he travelled more than 14 times trough the Alps (considering the possibilities in this time an extraordinary achievement).
He explained: the rocks were transported on their recent locations by an immense flood. That seemed to explain why most of the boulders found scattered around the plains of Germany came in first place from the regions of Scandinavia, where the same lithology where found in the crystalline continental basement, like Precambrian metamorphic rocks and paleozoic sediments. The theory worked lesser to explain the foreland rocks - to transport boulders from the Alps, the flood at least had to reach 1000 of meters.

Large floods are known to have occurred in the geological past trough the deposits and sediments that we found, but only local, and never capable to flood entire continents. The amount of (liquid) water needed to transport large boulders for hundred of kilometres were unrealistic. 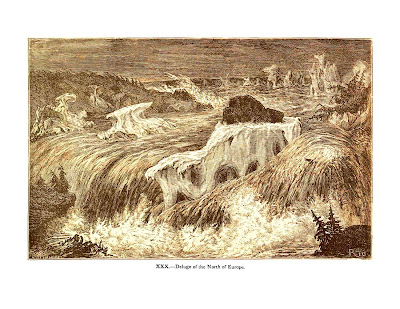 Bristow, H.G. (1872): The world before the deluge by Louis Figuier - Newly edited and revised by H.W. Bristow. 2nd. edition - Cassel, Petter, Galpin & Co. Only after 1875 the explanation, that glaciers transported the erratic boulders, was accepted universally.

Around the first decades of the 19th century books like Agassiz “Etudes sur les glaciers.” (published 1840) showed that glaciers can easily transport debris and huge boulders (he wasn’t the first, but his authority helped him to propagate the idea).
But the observation on the studied glaciers in the Alps leaded Agassiz to a even more heretic idea – glaciers not only are important geological factors in high altitude regions, but glaciers and ice covered large areas of Europe, North America and Asia in the geologically recent past, and transported debris for hundred of kilometres, where it was deposited after the glaciers melted and retracted to their modern extension.

Great post, tying the recent discovery of the huge erratic boulder to ice age erratics - and the heresy of being a geologist!