The status of the Quaternary is still uncertain, and debated between the different geological associations. 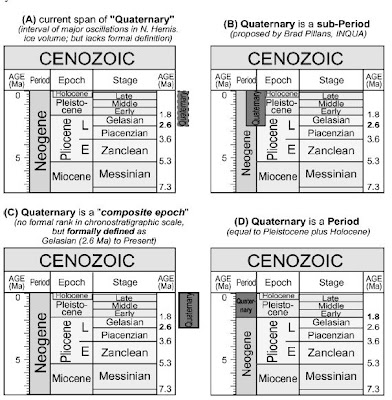 Current status and some possible options for formalizing the “Quaternary” interval of Earth history. Durations of stages, epochs and “Quaternary” on the geologic time scale are according to their span in millions of years. The Neogene Period begins at ~23 Ma (after OGG 2004).

The INQUA (International Union for Quaternary Research), representing more than 50.000 Quaternary scientist, now has reconfirmed the proposal of 2005 in an open letter by the chairmen’s Prof. J.J. Clague and Prof. Brad Pillans (28.02.2009). During the “International Commission on Stratigraphy” Workshop (Leuven, Belgium, 1–5 September 2005) 12 votes of the members of the executive officers of ICS (International Comission on Stratigraphy) were favourable to maintain the Quaternary as Sub-Era, but to shift the beginning (option B). 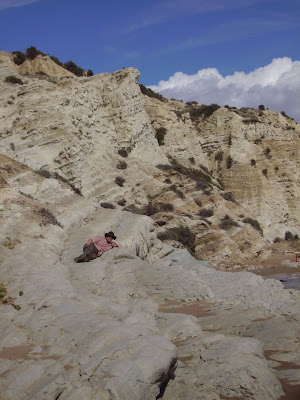 Pliocene-Pleistocene section of marls at Lido Rossello (Sicily). The GSSP for the Gelasian is definied in the same formation (Trubi-Formation and Monte Narbone-Formation).
OGG, J. (2004): Introduction to concepts and proposed standardization of the term “Quaternary”. Episodes, Vol. 27, no. 2
Eingestellt von David Bressan um 13:59

Maybe the Quaternary can be extended back and the Pliocene made shorter. While we're doing that, can we use Tertiary again?

here we can find more informations about the ongoing discussion: