Bozen, 12 April 2010: 9 confirmed victims, 23 people injured, these are the latest sad information’s about a rail crash between the towns of Latsch and Kastelbell in the South Tyrolean “Etschtal”, occurred at 9.00 p.m. this morning. The railway between the two localities follows the orographic right bank of the main river of the valley “Etsch/Adige” in a gorge eroded by the river in Holocene sediments (manly a large alluvial fan coming from south with unconsolidated debris-flow deposits).

A landslide of 400 cubic meters - with a width of 10 to 15 meters, and a thickness of 2m - bursted off 50m above the railway line and hit the first wagon of the train, that was just passing by in direction of Kastelbell, causing the train derailment.

To clarify possible causes of the landslide, geological investigations are underway. Eye witnesses reported large quantities of water running down the slope after the accident. A site investigation by the authorities preliminary concluded, that it’s possible that the rupture of an irrigation system above the location of the accident (the area is used for agriculture and farming) saturated the soil and underlying sediments with water, causing a mudslide just in the moment the train passed the point. The irrigation system, after the winter, was used since the last week, it’ s seems that at least in the last days to hours water infiltrated in the underlying slope. It’s also possible that the vibrations of the approaching train triggered finally the slide. 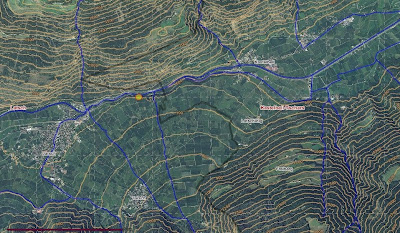 Fig.1. Location of the mudslide between the towns of Latsch and Kastelbell, ca. 1,4km after Latsch, from where the train was started some minutes before the accident (yellow circle) - the railway line follows the escarpment of the river “Etsch/Adige” between the two towns. The landslide happened on the orographic right bank of the river, in soil and sediments of a large alluvial fan. Coordinates of image centre: 46°37`43´´N and 10°52´54´´E (Product of the Autonomous Province of Bozen/Bolzano - South Tyrol)

I wish to express my condolence to the families of the victims, and thank the emergency services for their rapid intervention - only minutes after the accident they arrived on the place, and worked until now (11 hours) to rescue injured peoples.
Eingestellt von David Bressan um 08:42